Here’s a peek at most of the projects that Mike and I have undertaken over the past six months. We are becoming pretty handy and make a good team 99.5% of the time  The other 0.5% accounts for me not accurately following directions – or maybe, Mike not giving clear enough directions.  Probably some of both.  Despite Mike’s constant concern about me not paying enough attention to what I’m doing, we have managed to avoid any grievous bodily injury in the process!

One side and the back of the house are paved with small gravel pebbles.  Over time, the pebbles drift out of the pathways and get moved around, creating muddy spots.  Over the past few months, we have made several trips to Granite Rock in Santa Cruz to fill our buckets to recharge the pathways.  Did you know you can get a HALF TON of gravel for only $15?  I am tickled by this.  We have spent so much money on projects over the past six months that this feels like such a good value! 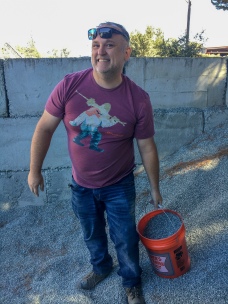 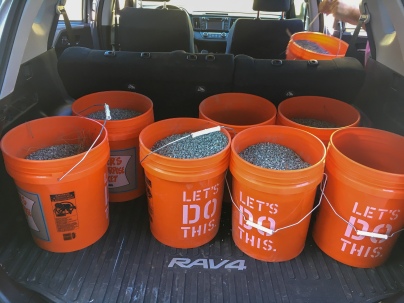 We also created a pathway in between the house and the garage.  We’re finishing the garage to make a work space for Mike, so we want to try to avoid tracking muddy feet in there.

At Granite Rock, we bought this pallet of Arizona sandstone: 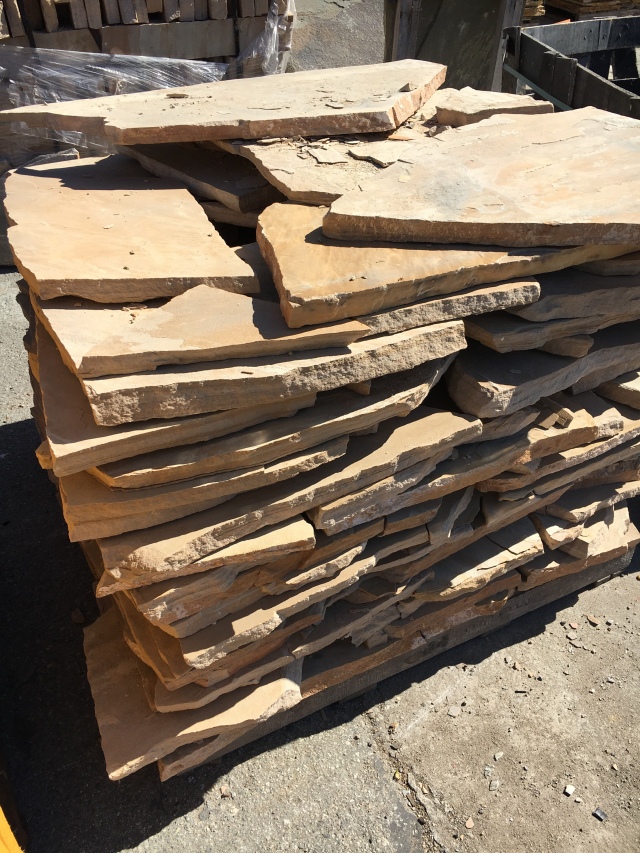 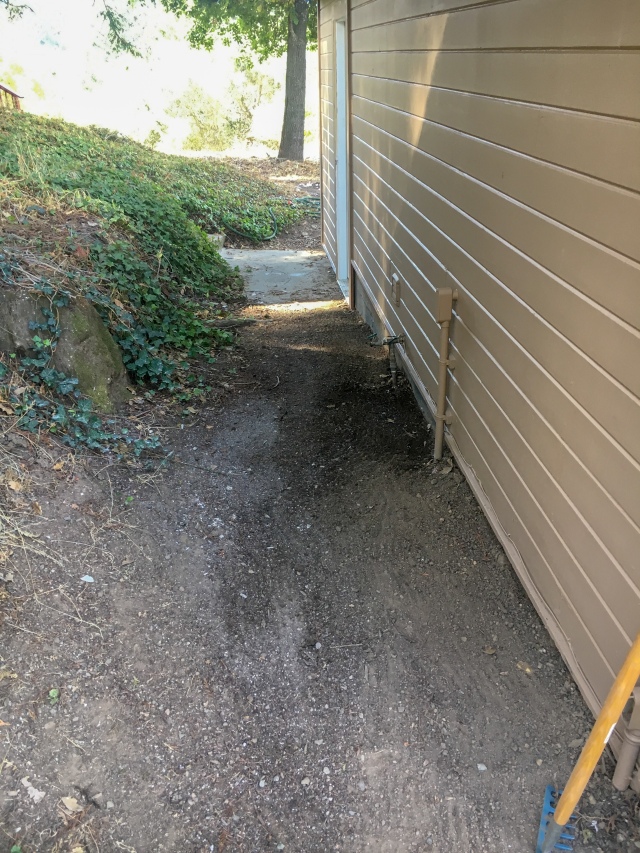 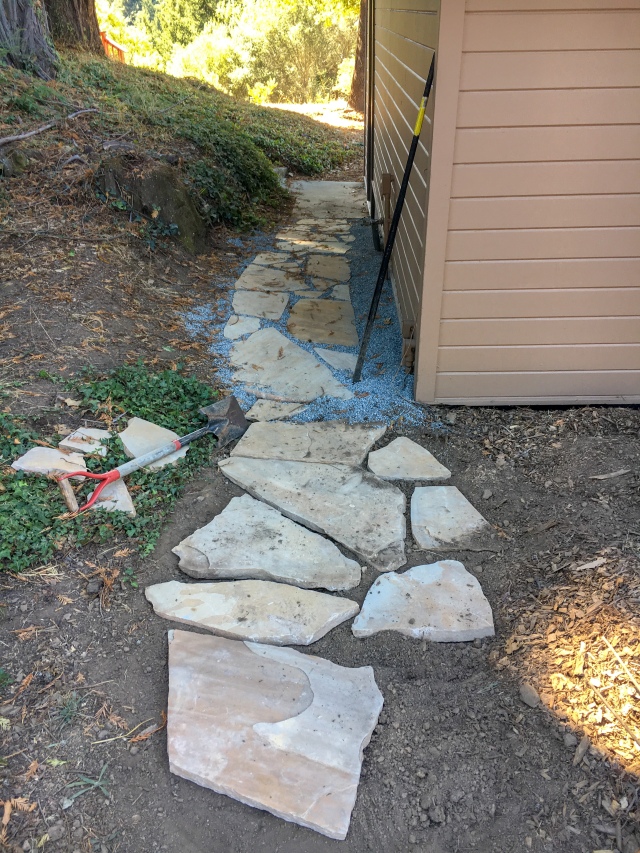 After!  Thanks to our friend, Summer, for helping with this project. 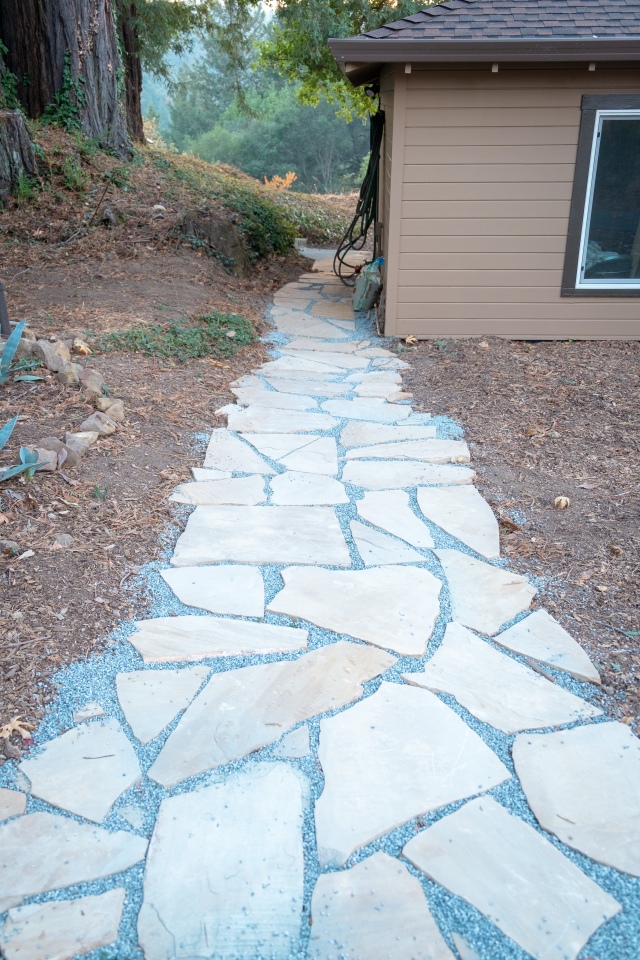 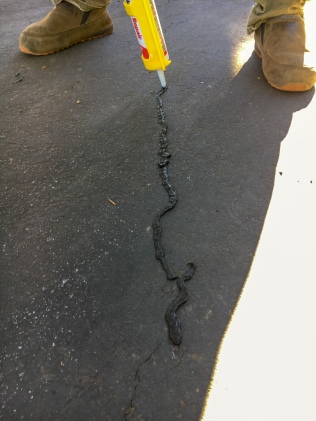 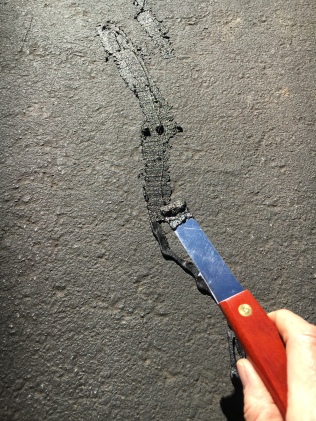 We want to protect our investment of finishing the garage by making sure it is adequately weather-proofed.  So, Mike and our friend, Courtney, caulked every crevice on the outside of the structure. 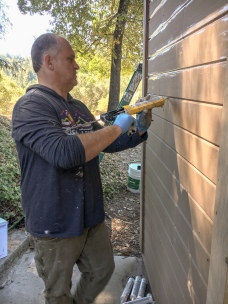 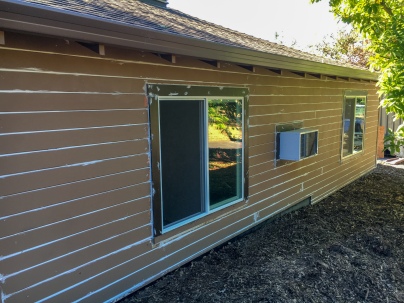 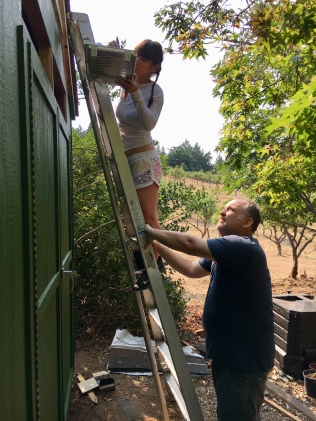 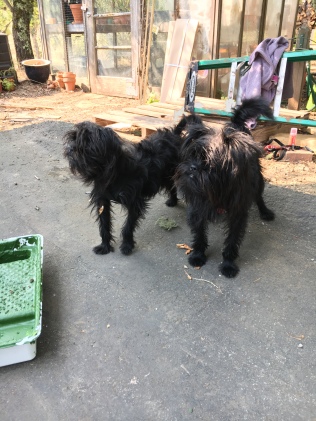 Making kindling is a yearly affair.  But, Mike does it himself – so it seemed apropos to include it here. 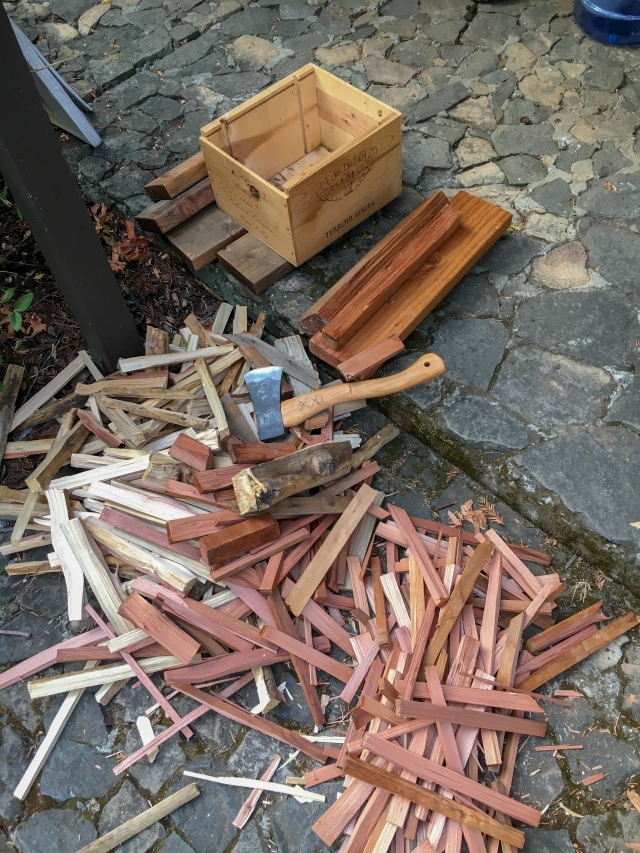 Same for stacking the firewood.  I do the manual labor of moving the wood.  Mike does the “skilled” labor of stacking it so it doesn’t fall over. 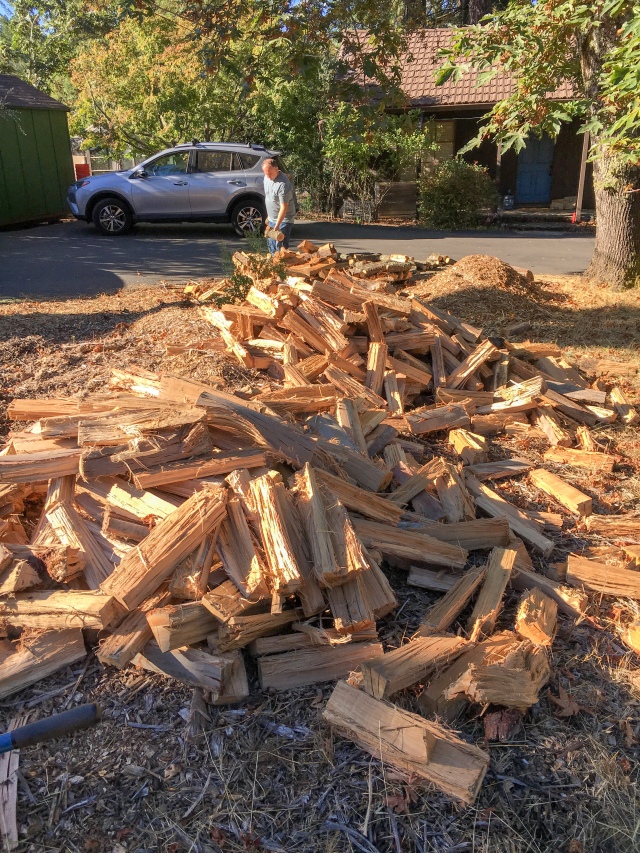 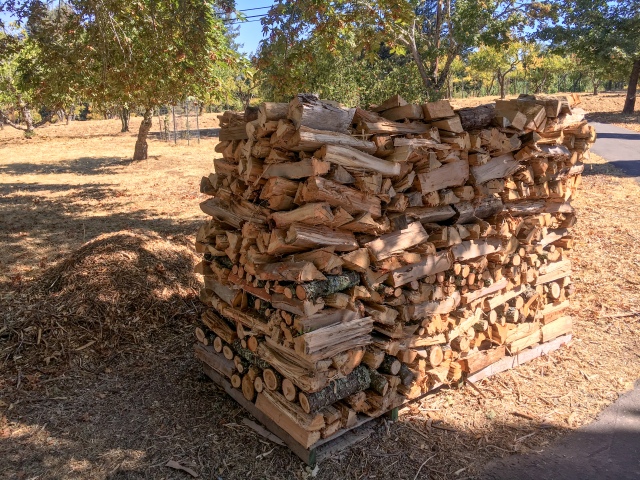 Our friend, Summer, gets credit for this one – but, I thought it was worth sharing to illustrate the joys of mountain living.  There was an old-growth redwood stump in the back that wood rats moved in to and created a nest.  It had to go.

Wood rats also made a nest in the shed that houses the water softener and water pressure pump.  We’ve had a big problem with wood rats this year.  Not only is it kind of gross to have them around, they have also eaten some of my plants, including seedlings and succulents in the greenhouse!  The greenhouse is very old and not sealed up very well, so they can wiggle their way in through open crevices – Mike caught one in the rat zapper, and we haven’t had a problem in there since!  They also make a mess by pulling the small wild plums off of the trees, eating part of them, and then leaving the pits all over the place.  Gross.

Again, not a strictly D.I.Y. project, but we got a new, bigger propane tank installed so that we can have enough propane to power the gas in both the house and the garage.

The gas line to the house also needed some repairing.  To dig down to it, Mike got enlisted to help the propane guy with digging this trench.  FYI – this ground is very, very hard and has deep roots running through it, so I can’t imagine this was a pleasant task!  The propane guy said that Mike could have a new career in working for him…

Last but not least, our big project of the year – the garage.  We are creating more room inside the house by finishing the garage to become Mike’s office and multi-purpose space.

At the end of June, we moved everything out of the garage and in to a shipping container. 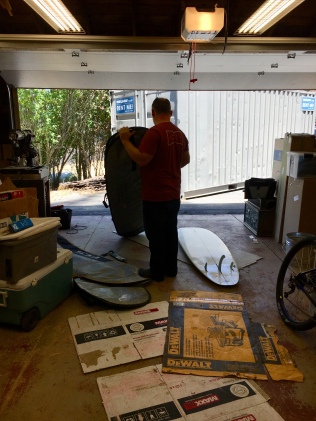 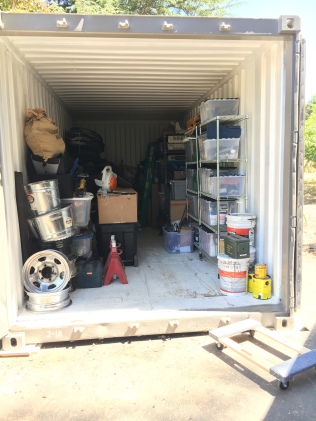 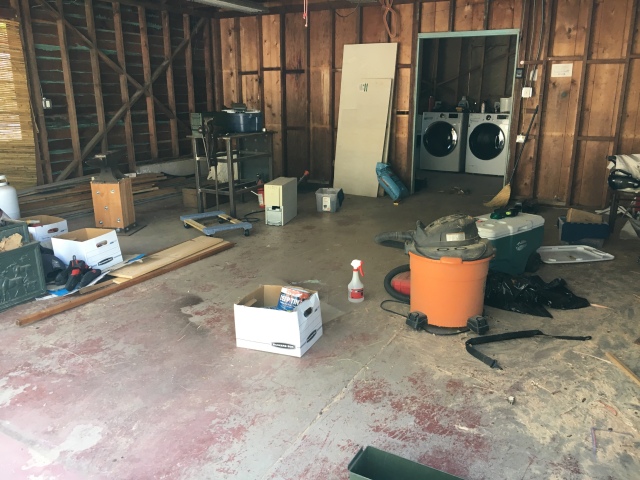 Builders extraordinaire Kyrod and Jynelle, with the help of Kyrod’s friend, Jordan (and some sheet rocking guys), have worked magic on the space. 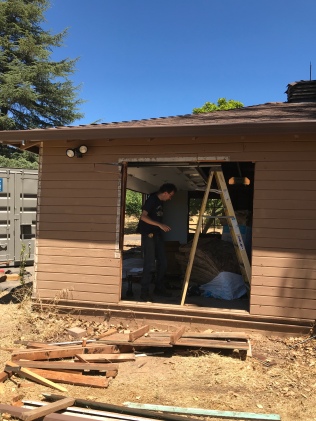 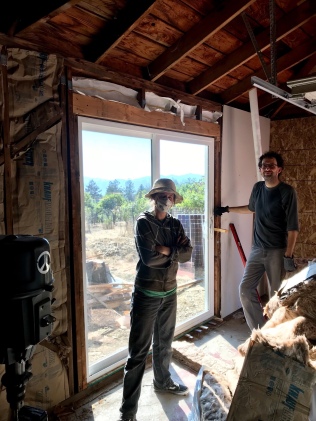 As of today, the floor is a work in progress.  Mike and Kyrod’s friend, Jordan, are “floating” the floor and insulating it – the cement gets really cold!  Once the framing and insulation is in, Mike will put particle board down on top.  His plan is to let the particle board settle (it might have some residual dampness) and then install bamboo tiles on top of it after a few months. 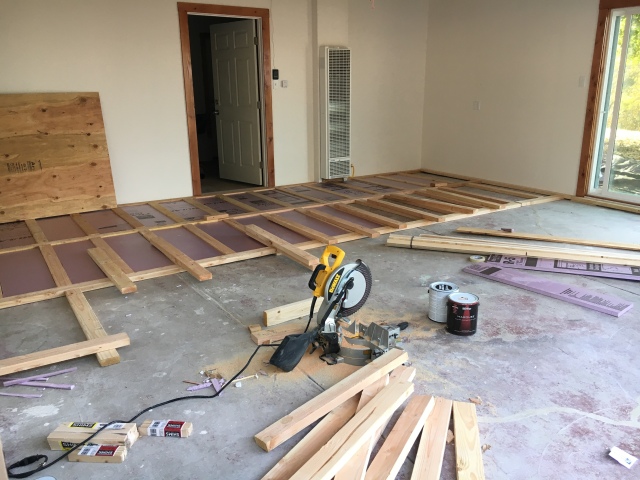 To be continued… hopefully after a restful winter during which we have time to enjoy our weekends.  🙂

November is my second-favorite month, next to the month of peak spring that spans the end of March and beginning of April.  What I love about November is how everything begins to get quiet and the natural world seems to take a deep breath with a long exhale before settling in for winter. 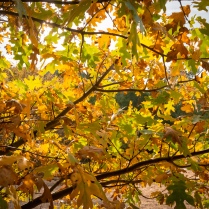 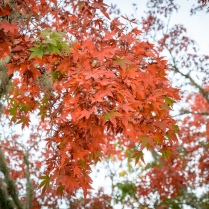 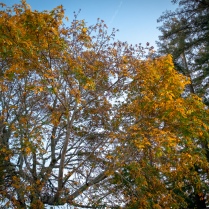 This year, the quiet settling of November has a different meaning because of the hard physical work Mike and I have been doing on the property over the last six months.  This past weekend, we finished up all of our major outdoor projects, which feels like a relief.  We’re closing in finishing the garage remodel.  Needless to say, we’re ready for a relaxing winter.

I successfully started romanesco, arugula, and Chinese cabbage in the greenhouse.  Wood rats ate the chard & the perpetual spinach seedlings, so I direct seeded some and covered the bed with fencing to protect the seeds from getting scooped up by birds.  We’ll see if they germinate. 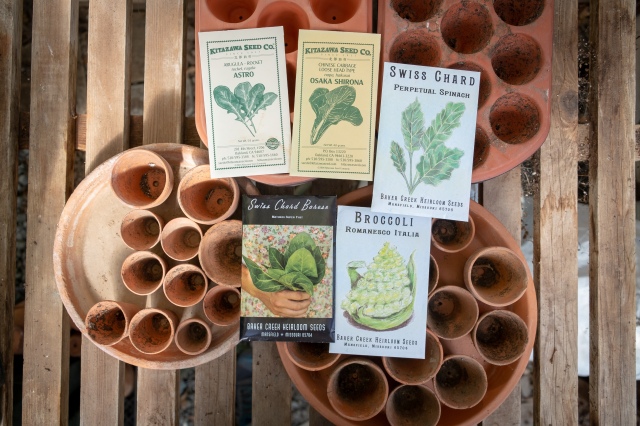 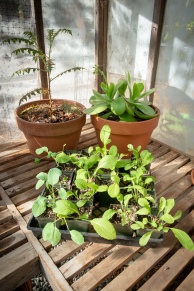 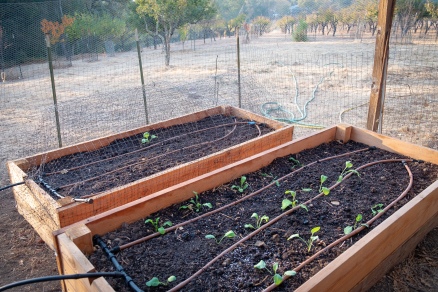 In a year when our stone fruit, apple, and pear trees didn’t produce their usual bounty, the Fuyu persimmon tree gave us more fruit than ever before. 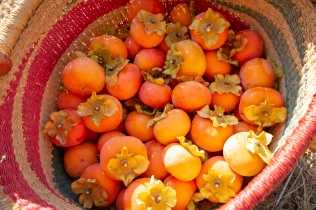 The original structure on the property was a chapel for redwood cutters in the early 1900s.  Original-growth redwood from the Santa Cruz Mountains contributed heavily to re-building San Francisco after the 1906 earthquake and fire.  That original structure is now the living room of the house, which retains its original redwood paneling and brick fireplace.

The redwood grove behind the house is like a chapel made by mother nature.

A chapel is a place of worship.  We find a higher power in physical work, in nature, in the dirt, in the changing seasons, in the transformation of flowers into fruit, and fruit into preserves, in the flight of bees, and in the songs of the birds.

Unless otherwise credited, all photos by Kim.